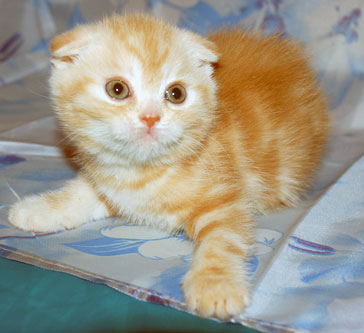 • Good with other animals and children

The most noticeable feature of a Scottish Fold is its ears. They are rather small and tightly folded, forward and down. The earflap is folded over completely to cover the ear opening and the flap is stiff and cartilaginous. The tips of the ear are rounded. Scottish Fold is of medium size with a solid compact body. Their head is rounded with a firm chin and jaw. This cats have gently curved and short nose. The muzzle is rounded with well-defined whisker pads. The head is set on a short neck. Scottish cats have large and wide open eyes with a sweet expression. Eye colour corresponding to the coat colour. The ears are folded forward and downward. They are small and tightly folded, the smaller and tighter the better. Body of Scottish foldis short and rounded. The legs are of medium length and in proportion to the body. Tail tapers to a rounded tip. Scottish Folds weigh between 2.5 – 6kgs.

The Scottish Fold has a life expectancy of about twelve to fourteen years.

No special attention to the ears is necessary, except that they have to be kept clean. Dental disease affects cats as much as it does humans. The cats gum and teeth should be regularly checked for cleanliness and if needed floss could also be used.

The short dense coat of the Scottish Fold is easily cared for and needs no special grooming, though brushing helps remove dead hairs and keep the coat looking neat and tidy.

percent of kittens with normal (pricked) ears and 50 percent whose ears are folded downwards and forwards. The average litter size for a Scottish Fold is about five kittens. Breeders recommend that Folds are mated only to normal-eared cats. When two folded-eared cats are bred together, the dominant gene that causes the folding combines to produce deformities of the spine, hind legs and tails. Also the Scottish Fold’s ears are difficult for the cat to clean itself, so owners would be wise to keep an eye on their cleanliness. It would also be advisable, as with all breeds, to have an annual health check from about the age of eight or nine to check teeth and liver and kidney function.

Not all Scottish Folds have folded ears.

When Scottish Fold kittens are born, their ears are just like the ears of most other kittens. It is not until they are between 21 – 28 days old that you really know whether the tiny ears are folded or straight.

The ears of Scottish Fold kittens may be only slightly folded, the definite forward folding not becoming fully apparent until they are about nine months old.

The Scottish Fold has a sweet, gentle temperament. They are playful, friendly, intelligent and inquisitive. Scottish Folds are calm, placid cats that enjoy staying indoors and can adapt to almost any situation. They do well in noisy houses full of people or with a single, quiet owner in an apartment. They are not clingy, demanding cats and usually prefer to be near you rather than on your lap. Scottish Folds enjoy a good game of fetch now and then as well, and keep their playful side well into adulthood. They have a sweet, quiet voice that they use sparingly. They are good with children and other animals.