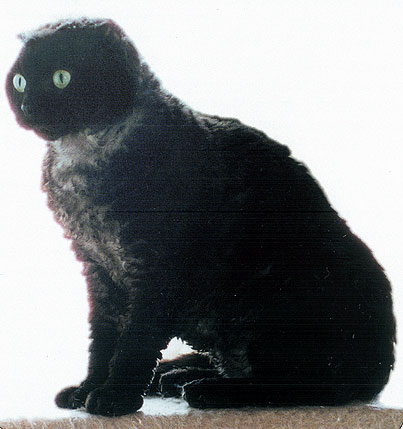 One more cat breed which has fold ears is called Poodle cat.

The Poodle Cat is a new breed of Dr. Rosemarie Wolf, developed in 1987 in Starnberg (Germany), derived from Devon Rex, Scottish Fold and European Shorthair. This process took 10 years. It is now found only in Europe and is very difficult to breed: these cats, like the Scottish Fold, may suffer skeletal defects.

Many people often name the Selkirk Cat a “Poodle Cat” but it is not correct. The Poodle Cat is a different breed; as a matter of fact, CFA website does not give this name to Selkirk Rex.

The Selkirk Rex was created at the same time as the Poodle Cat-in 1987 in the United States. Domestic cat brought a litter of 5 kittens in Montana. One of the kittens in the litter looked different from the others, primarily because of its thick curly hair. Subsequently breeders developed Selkirk Cats crossing them with Persian cats.

The principles of breeding The Poodle Cat are the same as for The Scottish Fold: cats with folded ears must be mated with cats with straight ears.

Type: The Poodle Cat is a medium sized cat. It is a heavy boned feline, well lined with muscles. Its body is lithe, but surprisingly heavy due to its hard muscular build.

Head: heart-shaped, well proportioned. Nose should be short. Chin is rounded and strong.

Eyes: bright, large, round. All variations of eyes are allowed, provided they match coat colour but copper is the preferred colour of the eyes.

Legs: medium in length, ending in round paws.

Tail: medium in length covered by curly or wavy hair. Short tail is a fault.

The Poodle Cats are attractive, affectionate, respectful and quiet. They are friendly to children and other animals. At present this breed is one of the rarest in the world.